The photosphere may be thought of as the imaginary surface

from which the solar light that we see appears to be emitted.

"Ursel Schlicht is a unique talent, a pianist whose gifts shine broadly over many fields. … A master of circular breathing, vocalizing and overtones, Dick’s extension of the flute has been compared to Paganini and Hendrix." (Florence Wetzel, All About Jazz)

Painting from 'A Love Primeval' by Will Ryan 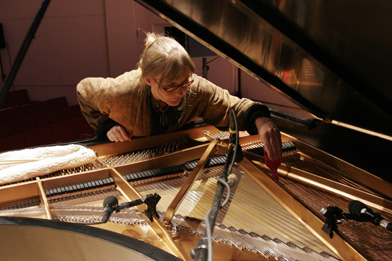 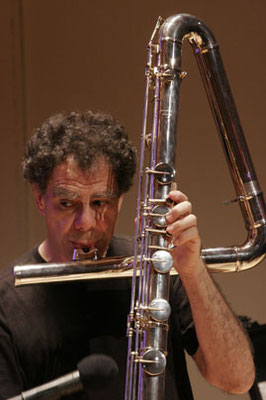 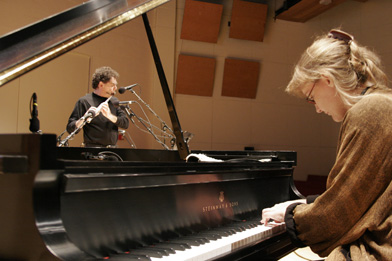 from the LINER NOTES by Gene Santoro:

A common pairing in classical music, flute-piano duos are rare in improvised music. But as they roam the territory between jazz, new music, and world music, Dick and Schlicht field a host of unusual sonics and techniques so startling that they open new panoramas.

Over the last three decades, Dick has redefined the flute’s apparent limits musically and technically. He is a brilliant technician with seemingly effortless mastery of complex breathing, vocalizing, and overtones. Schlicht offers the perfect stimuli and counterpoints. At the piano, she has a quiver full of sharpened skills; she bows them with a sure hand aiming not for bravura but for the soul of each piece. She morphs her keyboards from muffled doom-laden clouds to note-bending koto; she’s as likely to play inside the box — the piano sound box, that is — as outside it at the keyboard.

EMERGENCE opens with heavily damped piano and breathy bass flute cavorting at the edge of whistling and periodically startled by jagged accents. The conversation unfolds from reflection to restlessness to rage to resolution.

FAUST begins ominously, the piano lurking with large, angular steps alongside the dangerously capering, almost careening flute. The tempo accelerates into a dizzying eddy, and flute and piano dance a ballet of passion and power and human frailty in call and response that ends with the reprise of the fractured, leaping melody.

PIECE IN GAMELAN STYLE: The pyrotechnics on this solo tour-de-force are no less devastating than Paganini’s or Hendrix’s. Dick’s circular breathing alone is a marvel.

PHOTOSPHERE is direct and intelligent in a world of posturing and yelling and spin and hype. It asks for your attention rather than demanding it. But those whose ears are open and whose spirits are willing will find ample reward.

Nemu’s second release finds pianist Ursel Schlicht and flutist Robert Dick redefining themselves during this live recording from 2004. The opening, breathtakingly brittle moments of “Lapis Blues” were a perfect choice to introduce the duo; Dick plays the simultaneous roles of percussionist and flutist, while Schlicht’s bare-fifths rumbling on prepared piano provide a granite foundation for her partner's blues-bent and highly vocal utterances.

While pieces like “Lapis Blues” and “Faust” demonstrate an ability to blend high-powered compositional chops with riveting improv, the duo’s improvisational style is unique. The first half of “Emergence” might have been performed by a larger group; subtle percussives and overtones enrich the texture to the point that it's difficult to assess who is making which sound. Schlicht’s style of piano preparation often highlights resonance over percussion, so that lower notes flutter and grind, almost sounding like a second instrument.

Dick’s use of multiphonics is astonishing, each gesture involving such subtlety that only on repeated listens does the duo’s symbiotic approach really elucidate itself. It isn’t just a question of matching emotive states or tonal centers, which are constants on this disc; Schlicht and Dick have such complete understanding of their instruments that multileveled communication is more an imperative than an aspiration.

I do not mean to imply that extended techniques are the duo’s M.O., which would do such complete music-making a disservice. “Fragments” is introduced by some of the finest “conventional” playing I’ve heard in some time, with Schlicht conjuring images of piano greats like Michelangeli or Mark-André Hamelin with her control of the finest details.

and technique. I can only hope that this is the first of many offerings from this remarkable duo.

'Photosphere' is just incredible! Robert's breathtaking flute playing and dynamic range is well captured here as is Ursel's marvelous piano excursions. As Robert produces a wild variety of usual and unusual flute sounds, Ursel has placed objects inside the piano to get it a strange, more percussive sound. I love the way this disc is recorded, you hear the piano keyboard

on one side and the percussive inside-the-piano sounds on the other side. This music is not completely improvised, some mysterious written themes emerge here and there. Robert also deals with a good deal of percussive tapping as Ursel rubs things on the piano strings, making the duo a unique blend a fascinating sounds. Ursel produces some dark currents on "Emergence", adding sustain and percussive weirdness to an already brooding vibe. I dig the way the duo shift between tightly written passages of "Faust" and then layer their lines around one another completing each other's lines. Robert's solo work, "Piece in Gamelan Style" is another wonderful gem, where he twists notes in his own distinctive way and plays several sounds at the same time. Finally, Ursel's "Fragments" features her dazzling, hyper playing, moving in quick waves as Robert maneuvers tightly with her. Incredible!

Ursel Schlicht is a unique talent, a pianist whose gifts shine broadly over many fields. Her sound encompasses and explores jazz, improvised and new music and she has composed for dance theater and improvised for silent films. All this, plus her PhD, her years as a music teacher and her strong interest in intercultural exchange, make Schlicht a formidable musician, an intriguing combination of the adventurous and the cerebral.

Two new releases find her playing duets and live at that. […] Photosphere, five pieces recorded live in 2004 at Kulturhaus Dock 4 in Kassel, Germany, finds Schlicht with another strong musician in flutist Robert Dick. A master of circular breathing, vocalizing and overtones, Dick’s extension of the flute has been compared to Paganini and Hendrix.

Both Schlicht and Dick have impeccable chops and great intimacy with their instruments. The CD also highlights their composing gifts, with two songs by Schlicht, two by Dick and one collaboration. Throughout the CD flute and piano chase, question and challenge each other, creating unusual tones and sonic worlds.

Both CDs offer a chance to enter Schlicht’s musical universe, a rich well of ideas and inspiration as well as testimony to the endless possibilities inherent in the duet.